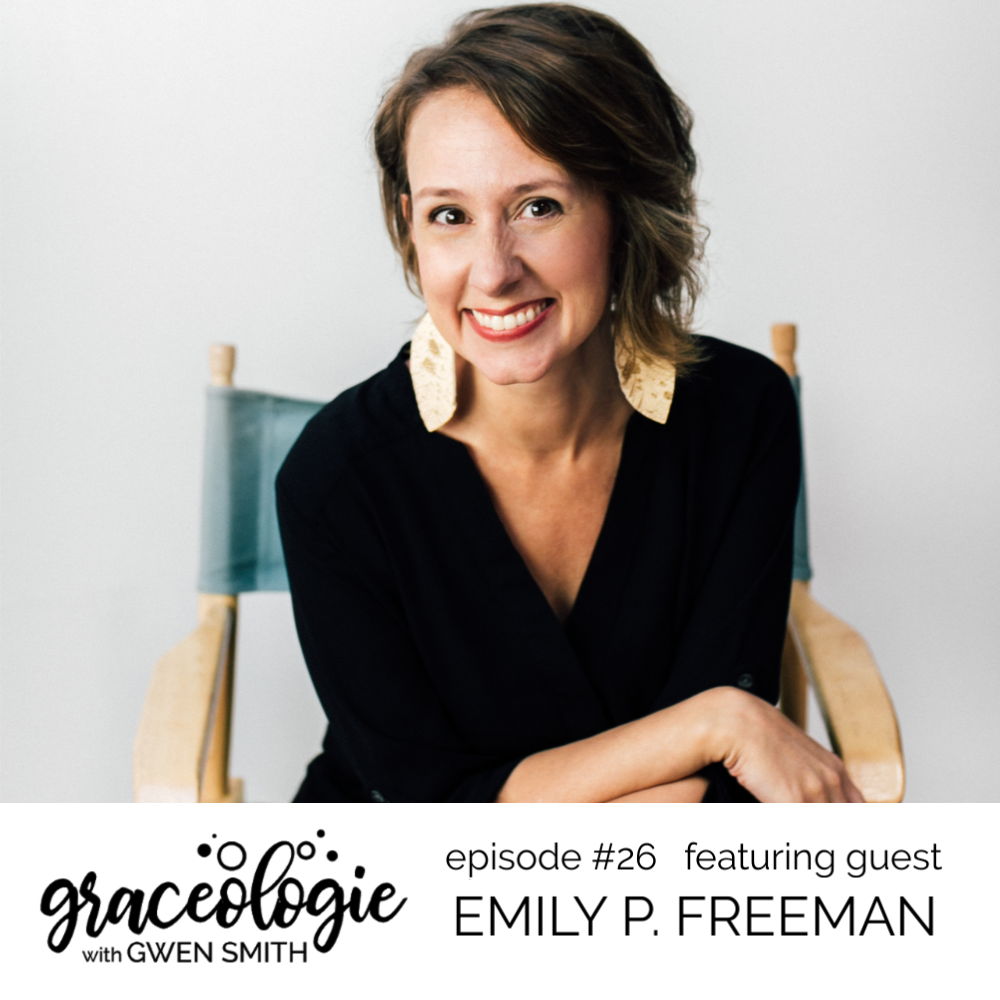 BUY the BOOK: The Next Right Thing, A Simple, Soulful Practice for Making Life Decisions

EPISODE SPONSOR: FabFitFun {Use code: GRACEOLOGIE to get 20% OFF your first box!}

OTHER BOOKS by EMILY: Simply Tuesday,  A Million Little Ways,

Emily Freeman, author of The Next Right Thing, is my guest on the new episode of Graceologie. We talk about how to live a life free of the daily anxiety of making the next right decision. With this simple, soulful practice, you'll find it is possible to clear the decision-making chaos, quiet the fear of choosing wrong, and find thecourage to finally decide without regret or second-guessing.

Gwen: In the beginning of your book you talk about like a big kind of scary decision that you had to make and then you talked about like kind of losing your way and turning into what you call a "hyper focused" version of yourself. And I had to laugh because you went on to say, "I was listening to sermons and waiting for God to give me a real specific direction." And then you were even looking through the quotes of the Dove chocolate candy wrappers. Oh my gosh, that was so funny. Such good writing, but so true. So why do we do this?

Emily P. Freeman: I think we're all terrified, we're going to make the wrong choice. So we look for signs and something from outside of ourselves to tell us what to do. Especially, there are certain personalities that do that more than others. I know some people might be listening be like, "What? Decisions aren't hard, what're you talking about?" But there are a whole lot of us, let me assure you, where chronic hesitation, second guessing and decision fatigue are a huge deal. And they can really kind of cripple us moving forward in daily decisions, but especially in those big scary hairy ones.

So I think that during this particular time, I was making a decision, it was like, when I’m trying to figure out something that makes it so that I’m not responsible, it's like if I can find someone to tell me what to do, then I’ll be able to know for sure. And I think a greater practice and something that I’m learning slowly is the beauty of, like you said earlier, creating space for my soul, so that I can discern my next right thing as I’m in touch with my soul, which is really in just regular terms that's my mind, my heart and my intuition as is connected with God.

I think so many times in so many situations, the answer is within us, but everything is so hidden beneath the piles of our everyday life and that the clutter of our daily living and our agendas that when we have a decision that comes our way, sometimes it just feels overwhelming because we don't know what we want to do. But I don't think the truth is necessarily that we don't know what we want, it's just we haven't yet taken the time to discern what it is we want. And that's a practice that I think can really help in decision making.

Gwen: So what's the story behind the book? Why did you write it?

Emily P. Freeman: Well, like you mentioned before, I was sort of going through this decision making process in my own life. And honestly, I was deciding it wasn't even a big deal thing really in the scope of life.

I was deciding whether or not to go to school to get my Master's degree, and this was like three years ago. It was one of those things where I wasn't making a decision between something really awful and something really good. It was like, I could go, I could not go. It was kind of up to me because my husband and I talked about it and he was all supportive, great timing, fine. I almost wish he would've said, no, this is not great, because that would've made the decision really easy.

So it was a big decision, but in the scope of life and death, it wasn't. It was a privileged decision. But, even though that's true, I started to pay attention to the way in which I was processing that decision on the inside and I started to get frustrated with myself that I couldn't choose. And I also started noticing the great power that the end decision had.

Unmade decisions hold a lot of power, and for many of us, until we decide, it's almost like we can't rest. And I think I’m learning how to carry an unmade decision in a healthy way, because sometimes I think some of us rush to a choice before a choice is needed, simply because we want to get the decision out of the way. And I think that sometimes leads to some regret and some second guessing because we just don't like that feeling of not having chosen yet.

So I’m taking notes and it started to feel the way some of my other books felt when the beginning. So I’m like, oh, this might be my next book. But let me tell you, months into it, I was trying to sort of outline the book or figure it out book form. Nope, did not want to be a book. And listen, I am an author, I write words in books, like this what I knew. And it was endlessly frustrating to feel like I had a book idea.

And this was even after the decision was made. Now I’m just carrying this idea of this decision making thing. And it wouldn't conform itself to the package I was trying to force it into. And this became another form of decision making because I thought, okay, now talk about meta. I had to like figure a way through this thing and it turned out, long story short or short story long I guess, is that it was a podcast, it wanted to be a podcast first. It wanted to be explored through the spoken word I think there's something really powerful and you know this as a podcast host. There's something powerful about speaking the words and also the medium of hearing the words. Something different happens in our brain when we speak and listen, rather than when we're reading. And I think I was just being invited into a period of time of using my voice in a different way and I’m really grateful for that.

Ultimately in the kingdom of God, we are safe, no matter what we choose.

It's really fascinating to see how He was, though his schedule was full he was never in a hurry. He didn't seem to be rushing to fulfil some type of mission that had to do with getting things done. He definitely had a mission, I mean we know that. And He definitely had a goal, but when it came to sort of His daily walking among the people, just the conversations that he entered into, were conversations with people who came across His path.

And often when He set out to go somewhere, we find Him being interrupted many times and things sort of happen that look like, well that was unexpected. And I wonder, to Him, maybe He knew it was all coming, but the way he just seem to deal with things that came across His path, like the crowd was pushing in on Him, and Jareth came and his daughter was dying.

But then in the middle of that, this woman who had been bleeding for 12 years, interrupts Him and it seems like, she should've been maybe second or third on the priority list that day. But He turned to her, because that's who was there, she was his next right person. Which, honestly, in a triage situation doesn't really makes sense. I mean she had been bleeding for twelve years, another 20 minutes, she's going to be alright. Meanwhile, the little girl is dying. It's like, it's an upside down way of thinking and it doesn't seem to make sense, but Jesus was okay with it, all was well with His soul, even in the midst of emergencies.